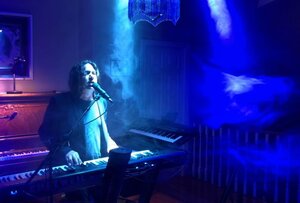 Darren Stevens played keyboards and sang with cover and original bands in Vancouver/Calgary since he was 18 years old but his first performance came at age 6 when he wrote a letter to Rolf Harris asking if he could sing with him on stage at his upcoming Queen Elizabeth Theatre show to which Rolf obliged. His first real gig was with a band called Sistor Cruz which later became known as Dillinger based out of Calgary Alberta, touring the Alberta and eastern BC countryside in 1984. By 1986 Darren returned home to Vancouver and joined Vancouver’s Vicious Rumours (1986 to 1987), playing keyboards including playing occasionally sans-vocalist as The Hawks . By later 1987 he formed the band Modern Romance and as a keyboardist and programmer, Darren hand-created many of the sounds used, and wrote the software used to control their live shows. One of the significant outcomes of working with Modern Romance was that Darren wrote the software UltraMIDI, later known as Slave Driver, to run the show. Then, together with sound engineer Ross Coplick using Darren’s UltraMIDI/Slave Driver software, the group Justus brought his huge synthesizer-based europop sounds to their audiences around the lower mainland and beyond, using unique technology developed for the show. Then in 1989, Darren made a change and applied his knowledge and talent to his most popular group Faith and Desire until 1991. These were the beginnings of a 35-year career writing real-time integration software applications, consulting, and running software companies. Today with his most recent works being in original music and video created with local performers around Victoria, produced under the name Francis Hillier, Darren is founder and CEO of the software company Avato and enjoys life on the Saanich Peninsula boating, flying and making music with friends.

PLEASE DONATE
We rely on those who submit contributions. If you are a regular visitor, we encourage you to please make a donation via the secure “Donate” button on the right side of the page in the "Support This Site" box to help cover the costs of maintaining and upgrading this significant archive. If you would like to donate by cheque or money order, please make them payable to "RC Music Project". Our mailing address is listed under the contact tab on the home page (above). Any amount is helpful and all donations are greatly appreciated.

FACEBOOK
Yes we're on FB posting a lot of gigs and videos of Victoria artists in a variety of musical genre's and situations. Drop by for a visit and click on the "LIKE" button, Click here !

VICTORIA JAZZ SOCIETY
To find out more about them and upcoming shows, Click here