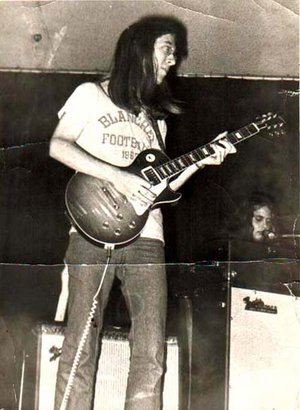 Some interesting info coming in as we go to our friends at pnwbands.com for more images. Another Vancouver based band that was formed and rehearsed in Victoria (actually Saanich Peninsula). Here's a comment from their website about them: "Their name evolved from Black Snake Blues Band, and they were one of the premier groups in Vancouver in the late 1960s. They were often opening act to many visiting heavyweight bands, and gigged up and down the west coast of the US and well as western Canada. They were regulars at local hot spots like the Village Bistro, the Retinal Circus, and the Big Mother. They devistated the crowd at the Aldergrove Rock Festival just outside of Vancouver in 1969 with their twin guitar attack and a killer version of Who Do You Love (much different than Quicksilver's or Bo Diddley's versions).
Recording wise, Black Snake didn't do much. They are featured on two tracks on the Cool-Aid Benefit Album (1970) that featured one original, "The Reason", and one cover, "Catfish Blues", and there was talk of of an EP".
Roger Stomperud, February 2002