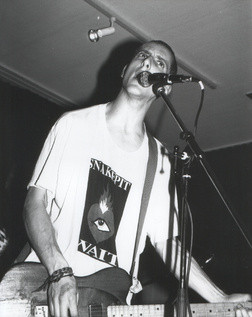 * Andy Kerr is a Canadian-born musician, originally from Victoria, B.C. and currently residing in Amsterdam, the Netherlands. Kerr is best known as the former guitarist, frequent vocalist, and co-songwriter in the progressive punk rock/punk jazz band NoMeansNo . He has also recorded and performed as a solo artist, and his current group is Two Pin Din. Kerr initially appeared Victoria's punk rock scene in the late 1970s as the singer and guitarist in the punk rock groups Dioxyn and The Infamous Scientists. Founded in 1979, the latter group released two EPs prior to disbanding in 1982. The final lineup of this group included NoMeansNo drummer John Wright.
Kerr's first project after leaving Canada found him collaborating with Victoria musician Scott Henderson (of Shovelhed and the Showbusiness Giants, among other groups) in an unorthodox manner – via airmail. The pair would individually experiment with home recordings and mail each other cassette tapes of their efforts for the other to elaborate upon. Calling themselves Hissanol, the experimental group released two full-length albums on the Alternative Tentacles label. Kerr has been working with former Dog Faced Hermans drummer Wilf Plum in a two-piece guitar rock project called Two Pin Din. The group released their debut record, In Case of Fire Break Glass in 2008. *Source Wikipedia

PLEASE DONATE
We rely on those who submit contributions. If you are a regular visitor, we encourage you to please make a donation via the secure “Donate” button on the right side of the page in the "Support This Site" box to help cover the costs of maintaining and upgrading this significant archive. If you would like to donate by cheque or money order, please make them payable to "RC Music Project". Our mailing address is listed under the contact tab on the home page (above). Any amount is helpful and all donations are greatly appreciated.

FACEBOOK
Yes we're on FB posting a lot of gigs and videos of Victoria artists in a variety of musical genre's and situations. Drop by for a visit and click on the "LIKE" button, Click here !

VICTORIA JAZZ SOCIETY
To find out more about them and upcoming shows, Click here